Take up the challenge and pick up the whistle to give back to the great game. All are welcome to come along to our training's and meetings if you are interested in becoming a referee.

Preseason Training's are going to start in February 2019. Check out what we are up to on our Facebook page or on our events page.

Refereeing is the best seat in the house and great way to keep/get fit and contribute back to the great game of rugby league. There are so many opportunities available with refereeing should you wish to challenge yourself.

Fourteen Auckland referees have this weekend become the first New Zealanders to take part in the NRL Emerging Referees Camp.

Eighteen-year-old Auckland referee, Jack Haslam, said it gave a clear insight into what is required to advance into the NRL system.

“The experience has been unbelievable, and quite an eye opener in terms of what it takes to be an NRL ref,” Haslam said. “They gave us a whole run down on what needs to happen to make that level, and I certainly have a better understanding of it now. “The rule interpretations between New Zealand and Australia are a bit different, so that was interesting as well.”

The New Zealand group have been preparing for the camp since December, with help from experienced local match officials such as Anthony Eliott and Chris McMillan, who have both worked in the NRL system. The camp was also used as a way to upskill Auckland referee coaches. Hayne said the programme - which was staged at Mount Smart Stadium and Cornwall Park - mirrors what is currently being rolled out across Australia.

“We need to draw on officials from New Zealand when the games are over here, and the only way we can do that is to start educating them the same way we do in Australia,” Hayne said. “We are identifying kids at a younger age, to educate them on all the new methodology, the coaching and training practices we have put in place. “Hopefully after the camp we will be able to identify some referees we can push through the system.” 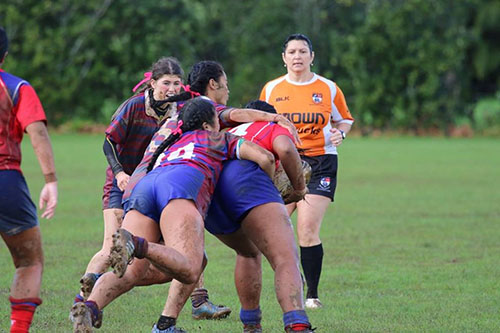 Vodafone Warriors community manager Petrece Kesha has become the first woman to be made a life member of the Auckland Rugby League Referees’ Association.

Kesha has refereed in Auckland for almost 20 years and also oversees the Vodafone Warriors’ community programme, which includes the club’s charity partnerships, children’s football clinics, the League in Libraries programme and other key projects. Kesha was awarded her life membership at the Auckland Rugby League Referees’ Association’s annual meeting on Tuesday night.

“I was hugely emotional when I was presented with life membership. It really means a lot to me, and to be the first woman is such an honour,” she said.

Kesha said she always wanted to play rugby league as a young woman but her mother wouldn’t let her, so she became involved through refereeing instead.

“I think Mum thought it was too physical and didn’t want me playing but I really wanted to be involved so thought I would coach,” she said. “To help me become a better coach by learning the rules and to have a little empathy for the guy in the middle, I decided to referee for a season first. I was 19 years old and never looked back.

“I am hugely passionate about growing the number of women involved in rugby league across New Zealand, whether that’s playing, coaching or refereeing, so I feel really proud of this personal accomplishment as a woman in rugby league.”

Asked how many games she’s refereed in her lifetime, Kesha can’t put a number on it but says it would be “in the many hundreds.” “I’ve refereed such a range of ages, genders, and levels, and I absolutely love it,” she said. “I think the guy or girl in the middle can often get a hard time, and often referees are given a tough rap, but without referees rugby league in New Zealand just wouldn’t exist.

“I also think a lot of people think being a referee is a lonely job and that you don’t have the camaraderie of a team but being a member of the referees’ association that is exactly what you become – a member a much bigger team. It’s a great environment and so rewarding. You learn so much more about the game.

“Rugby league is a huge part of my life. I’m so proud to work for the Vodafone Warriors who are incredibly supportive of the role women play in our great game. You just have to look at our season with the first NRL women’s team and having a female head coach. It was such a buzz to be a part of that history.

“There has also been the recent growth in the female game with the Auckland Rugby League introducing the under 13, 15 and 17 girls’ nines competition while the referees’ association had three new women joining this year taking the total of female members to nine. I can’t give it away now. I’m too excited with all that the 2019 season promises.”

Have you ever thought about becoming a Referee or a Touch Judge?

The Auckland Rugby League Referees Association are in need of referees and touch judges for the 2019 season.